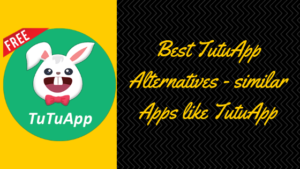 As they say, nothing is perfect in this imperfect era. TutuApp is a great App Store, still, there could be several reasons to dislike Tutu App. For example, many people don’t like to pay the subscription fee in TutuApp to get premium features. If you’re also on the same boat, then you should probably consider trying out the TutuApp Alternatives mentioned in this article.

The list of App Store shared below is coming from third-party developers with a lot more features and options than you would get in the Google Play Store. It may take a while to find an App Store that fits all your requirements, but it’s completely worth trying out all the apps mentioned below, you wouldn’t be disappointed.

Blackmart Alpha Apk-> This one is quite a famous third-party app store for Android devices since it delivers a lot more than just apps and games. Users will have to install the BlackMarket Apk file on their device and create an account in the app to get started. You will have access to all the apps and games as soon as you finish the registration process. There’s also a separate section in the App where you can find the Mod Apk files of popular apps and games for your Android device.

You can even download some of the paid games and apps for free of cost using the BlackMart Alpha on your Android device. Just make sure you register your account and verify to download the paid apps.

MoboGenie Apk-> MoboGenie App Store has been around for years now, it has been constantly growing in popularity ever since its inception. Mobogenie is a one-stop hub to download the apps and games created by indie developers for Android devices. Unlike other App Stores, MoboGenie Apk doesn’t contain any paid apps or games.

Actually, you don’t even have to go through the registration process to download free apps or games. The only drawback is that MoboGenie doesn’t encourage any Mod Apks of apps or games, which may not be much of a problem for casual users.

Aptoide Apk-> Aptoide Apk is well known that lets you download all the premium apps and games for free on your Android mobile. It’s a great place for those who are always behind the Mod versions of Apps. It doesn’t matter what kind of android app you’re looking for, Aptoide has it all covered for you. Another good feature from Aptoide is that you don’t have to bother about the updates of the apps and games you have installed from Aptoide.

Aptoide takes full care of your Apps and keeps them updated to the latest version automatically without your involvement. In terms of user experience, it has to be the best App Store out there for Android devices.

9Apps Apk-> 9Apps is another simple App Store for Android devices that come with a minimalistic user interface and navigation system. Well, it doesn’t contain as many apps as you would find in other App Stores. But it’s an ideal option for those who aren’t really into Mods or Cracks. Despite being small in terms of size, 9Apps still managed to compete with other App Stores in this list of best Apps like tutuApp.

The app also tracks your App downloading and browsing behavior in order to provide you with personalized recommendations that you may find helpful. It’s a great way to discover some useful applications and games for your Android device.

GetApk Market-> GetApk Market is the perfect competition for the TutuApp Store since both of them go in toe-to-toe when it comes to the range of apps and games. Users will be able to download their desired apps in Apk file format which can be shared with other Android devices from the App itself. Despite having the largest database of Apps and Games, GetApk Market doesn’t compromise with the security and safety of users.

The apps and games which are available in the GetApk Market are free from any kind of intrusive malware. You don’t have to worry about anything. Go ahead and try it out on your Android device.

The App Stores which are mentioned in this article are Similar Apps like TutuApp and all are free of cost and don’t contain any kind of subscription like TutuApp does. If you know any other good TutuApp Alternatives, then feel free to share it with us in the comment section below.