HOW TO DOWNLOAD AAROGYA SETU APP – STEP BY STEP GUIDE

There is a pandemic situation all over the world. The superpower countries are also now made to bow against a super nano microbe called COVID-19 or SARS 2.

India is still in better condition as compared to most of the countries hit by the virus. The first measures taken by the Government resulted in containing the virus at the bay, but unfortunately, it somehow made to enter the nation.

The first case of COVID–19 in India was found in the state of Kerala, but the patients were recovered, but eventually, it widespread all over the nation. The virus has almost entered the third stage i.e., community transfer stage.

To maintain the survival of the second largest populated country in the world, strict measures and smart ideas were necessary. The lockdowns are implemented all over the nation, and continuous tracing and testing are done of the people who have travel history to foreign countries.

Peopled disobeying the rules of the lockdown is getting punished by the police publicly and are regarded as betrayers of the nation. The media department is also working hard to provide the latest news regarding the infection and is continuously promoting advisories and protective measures.

Besides these, a very advanced and new idea came up for developing an app that can track the infection, check the symptoms, and also guide and alert the users.

The name of the app is Aarogya Setu, which is a mobile application. Our honorable Prime Minister, Mr. Narendra Modi, announced the app on 2nd April, and it made an appearance on the play store on 5th April.

It is an all in one app, which is a brilliant idea proposed by any of the governments around the globe. India was the first to introduce such an app.

As an application, it is more interesting nowadays, and as it will be for betterment, so it makes double the effect of benefit for the people. It is effortless to use and is widely accepted around the country. It is because of this application the Government is finding it easy to tackle the situation.

WHAT IS AAROGYA SETU APP?

Aarogya Setu is a mobile application which is developed by the National Informatics Centre that resides under the Ministry of Electronics and Information Technology, Government of India. It was launched on 2nd April 2020 but marked its appearance on the Play Store on 5th April.

It is available for both android and IOS devices and is available in 11 languages, which makes the app easy to use for a wide range of the population of the nation. The words are English, Hindi, Telugu, Kannada, Malayalam, Tamil, Punjabi, Bengali, Oriya, Gujarati, Marathi.

It is is one of the most popular government applications in India, as it has reached 5 million downloads in just three days of its launch and is also expected to get more languages included in it soon, which will make its use to be more comfortable for more of the population.

WHAT ARE THE AMAZING FEATURES? 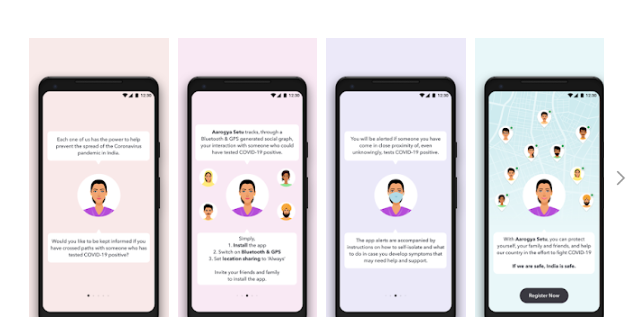 Aarogya Setu has some features like symptoms checking, which can be used to predict the infection and help the Government to take further steps for the user-developed symptoms. If a person is ready to volunteer to help the nation to fight the pandemic, he/she can appeal for it through this application itself by going through a short assessment.

It has a tool for self-testing. The user is asked a few questions. In case the user has COVID-19 symptoms, the information will be sent to the government servers. The data will be used by the Government to take for the isolation procedure and further steps, if necessary.
The user will be alerted if he/she comes near, unknowingly, tests positive. The instructions accompany the alerts on how to self-isolate and what can be done if a person develops symptoms.

Many people are unaware that it is the updated version of an earlier app Corona Kawach which was already released by the Government of India. The application is also built on a unique platform that can provide the Application Programming Interface (API) so that the other computer programs, mobile apps, and web services can make use of the features and data available in this application.

The application will be playing a very vital role in containing and tracking the infection and also in spreading awareness among the people.

It’s availability in different languages and easy to use features are favoring most of the people to download and use it for their betterment.

It was a masterstroke by the Government to make such an app because nowadays the internet surfing and craze for new software and application are at the peak, and such requests will be favoring both sides.

The Government is also planning for future updates of the application to make it more informative and easy to use. It is providing straightforward measures to contain the infection and is also alerting people to be safe.

WHAT IS THE PURPOSE OF DEVELOPING AAROGYA SETU APP?

Aarogya Setu app is developed to spread awareness, connect health services for the people of India. It is a tracking app that uses a smartphone’s GPS and the Bluetooth features to track the coronavirus infection. It is meant to implement the initiatives of the Department of Health to contain the risks of COVID-19, share the best practices, and advisories.

Overall, this app is a package of safety, a brilliant initiative ever taken by any country.

HOW TO USE AAROGYA SETU APP?

3. It asks you some information so that it could help you in finding out whether you are COVID-19 positive or negative.

4. Install the app and turn on the Bluetooth and allow device location as prompted.

5. The application will alert you if you come in close to a person having symptoms and will provide advice for self-care, hygiene, and self-isolating measures.

6. Complete the registration process by clicking on the register button.

9. After entering the OTP, the page will be directed to a form where the user has to enter his/her name, age, profession, as asked.

10. The person will be asked about foreign travel history in the past 30 days. The answers submitted by the user will be matched with the persons tested positive, with the help of the IMCR database.

At last, the application asks whether or not the user is ready to volunteer in the times of need. If the answer to this is yes, a 20-second assessment test starts.

There are many third-party applications on the Play Store with the similar term “Aarogya” or “Arogya” in them. Download only the official aarogya setu app for both Android and iOS from the link below.