Nintendo DS, or simply known as DS, is one of the most popular and well-known handheld gaming consoles developed by Nintendo. The handheld console was released way back in 2004 and was arguably the first console to feature dual screens. We do not wish to go into the history of Nintendo DS, but there are plenty of games that many of us have played and still wish to play somehow if possible.

Indeed, it’s possible to play your favorite Nintendo DS games on your computer or laptop with the help of a DS Emulator. Developers from various parts of the world have started coming up with tools and software that can emulate or mimic the Nintendo DS console on PC. As a result, we’ve got plenty of DS Emulators in the market; therefore, we’ve decided to handpick the best and efficient ones and feature them in this article. 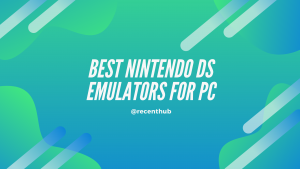 Before jumping into the list, we’d like to inform our readers that the Emulation of Nintendo DS console is in the early stages of development. Right now, the developers of DS Emulators are trying to make their emulators more powerful and support a wide range of games, which in return, leaves much space for optimization. Therefore, you may experience slowness in certain games. Related: Couchtuner Alternatives

The name itself might give you a weird sense of feeling and even worse with its pronunciation. However, DeSmeMe is one of the most stable and accurate emulators of the Nintendo DS console. For the most part, the performance of the emulator is directly proportional to the configuration of your PC. But, you can always tune down the graphics to the lowest if you face frame drops while playing.

MelonDS is another DS emulator that has been gaining a lot of traction and popularity in recent days. In terms of features, the MelonDS Emulator cannot be compared with DeSmuMe; however, it outperforms the before mentioned emulator in terms of rendering games. More importantly, the emulator allows users to experience games in maximum resolution, even on medium performance-based PCs.

NeonDS is a healthy option to pick if you’re looking to play Nintendo DS games on your PC. It manages to pretty much fulfill all the basic requirements of a DS Emulator with ease. Initially, the Emulator may give you problems in rendering the games, but after a little tweaking, you’ll definitely see the emulator shining and doing its work flawlessly. Go ahead and give it a try, if you’re good with emulators and their settings.

DuoS are comparatively a new contender in the DS Emulator market; it comes with support for a vast majority of DS games. There’s not much to brag about the features in this one since the emulator is quite generic; however, the emulation of Nintendo DS is on point in DuoS Emulator. One of the key strengths of this Emulator lies in its easy to use and simplistic aspect.

Read Also: How to use discord

iDeas is an extremely optimized DS Emulator that comes with limited support for games. But, the areas where it truly excels and outperforms is the raw emulation of Nintendo DS games. Of course, it may not support a wide range of games like others, but the ones it does can be played at maximum graphics with the highest rendering settings without any frame drops or slowness.

As far as the DS Emulation is concerned, all of the ones mentioned above are quite good for the most part. But, each one of them has its features and user interface unique to them. Some of them are difficult for beginners to get started, while the rest are tough to understand and use. Let us know which one of the emulators, as mentioned above, you like the most in the comment section below.